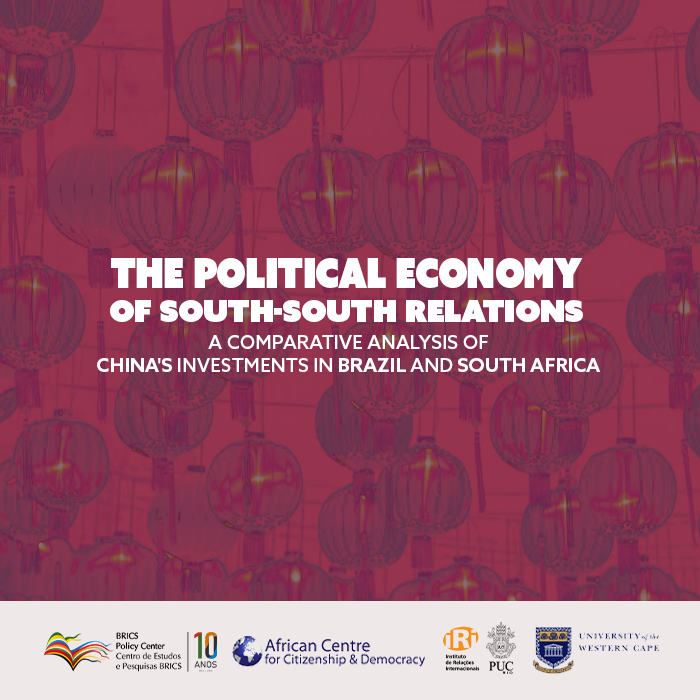 The BRICS was constituted throughout the 2000s as a political and economic group from the Global South. Building on previous research and partnerships, this new project aims to enhance collaboration between the BRICS Policy Center (BPC) and the African Center for Citizenship and Democracy and deepen a comparative analysis of Chinese investments in Brazil and South Africa. The project will produce two complete reports that will map: the flows of foreign direct investment, observing the main sectors and projects that operate in Brazil and South Africa; the main public and private institutions (local governments, banks, associations) between entrepreneurs that facilitate the interfaces and the beneficiary States; it will be public policies that facilitate, promote and protect investments, such as national programs, legislation, investment agreements, as well as credit policies; Finally, identify relevant projects in Brazil and South Africa to analyze them and affect the local environment in Chinese investment communities, their environmental impacts, workers and means.

With the Chinese materials by teams, the project of strategic promotion, training and training between two civil society and network movements, organizations of investment movements in the two popular countries. In addition, focusing on the comparison and evaluation of public policies, the project will create spaces for dialogue with democratic agents and decision-makers at local, national and international levels. It will be discussed to what extent the investments of the South-South can occur in a more cooperative socioeconomic way, under more balanced bases, or these investments reproduce in hierarchies between countries of the Global South with negative impacts on communities, workers and the environment. Thus, we intend to contribute to a broad understanding of the new configurations of global capitalism and the role of China for the development of public policies, and for economic, sustainable and sustainable development.

The project is supported by Karibu Foundation, FAPERJ, among other national research institutions, and will be coordinated by professors Ana Saggioro Garcia and Maria Elena Rodriguez (BPC-IRI/PUC-Rio) and Lisa Thompson (ACCEDE and University of Western Cape).