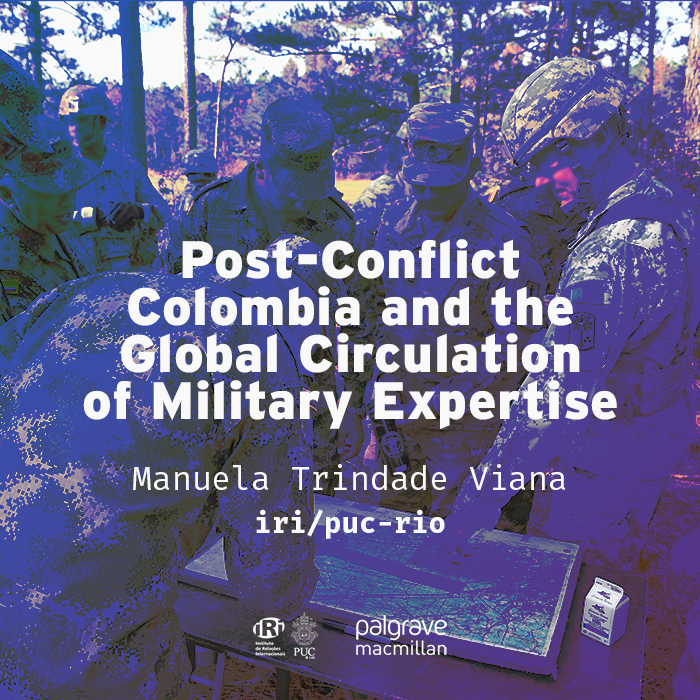 Professor Manuela Trindade Viana has just published the book “Post-conflict Colombia and the global circulation of military expertise” by Palgrave Macmillan. The work is part of the series “Critical Security Studies in the Global South”, edited by Profs. Pinar Bilgin (Bilkent University) and Monica Herz (IRI/PUC-Rio).

In the book, Manuela proposes that we think about the “post-conflict” not in terms of the presence/absence of violence, but of changes in the use of violence. Taking Colombia and its international circulation as a “successful case” as an entry point, the analysis unfolds in two parts. The first explores the conditions of possibility of this “success story” and the web of criteria that legitimize it, as well as the silencing mechanisms that allow Colombia to circulate internationally as a formula to be replicated in other parts of the world. The second focuses on the historicization of the mechanisms by which the new rules are transmitted among the professionals of the public force, especially the transformations of military schools and training centers in Colombia from the times of “war” to the times of “peace”. Manuela argues that the key to repositioning the country in the hemispheric and global circuit of military knowledge is a discursive articulation around the military professional who moves from the “soldier-citizen” to the “soldier-expert”.

The book’s preface is open access, as is the index – both available.