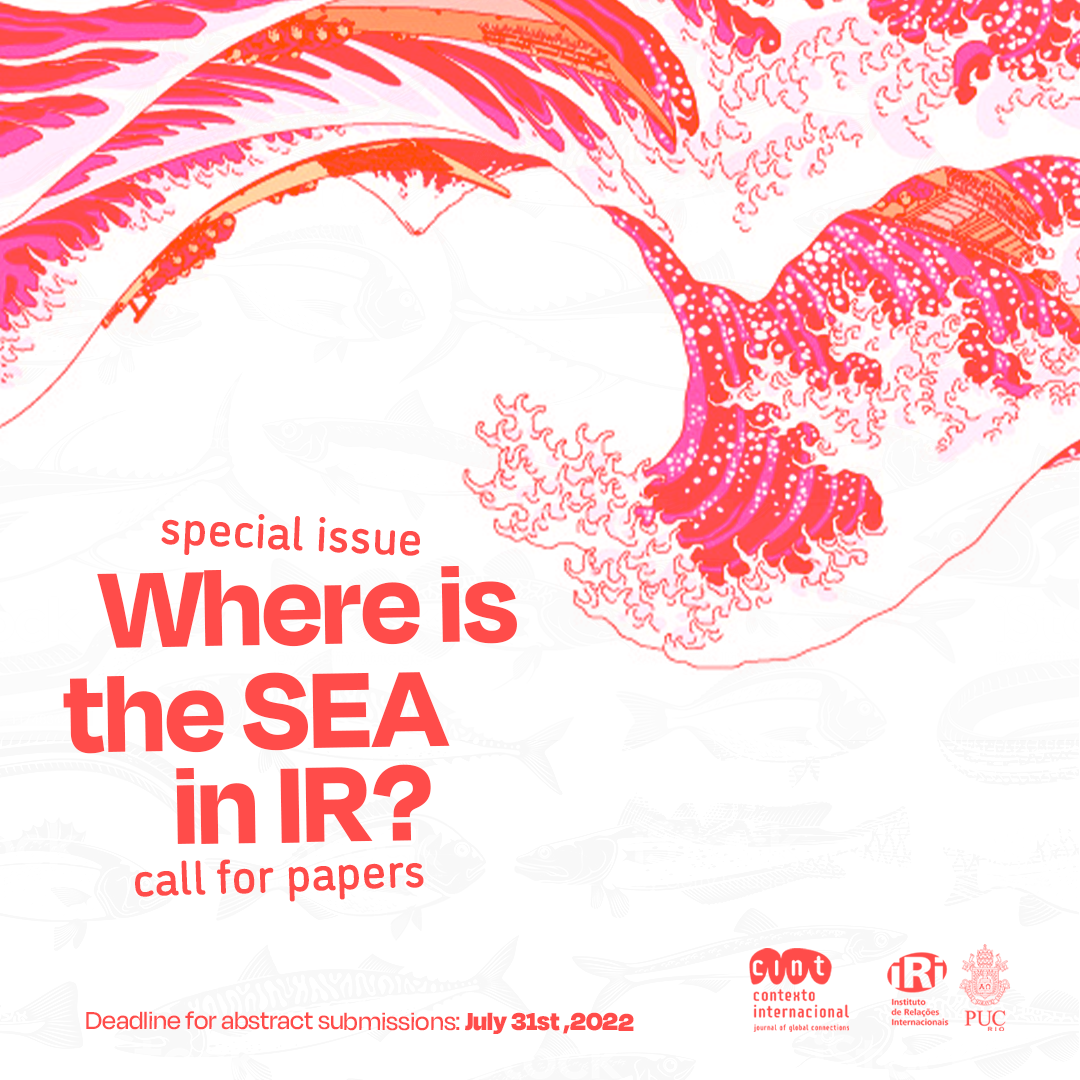 Where is the sea in International Relations? Is it possible to envision the sea on its own terms instead of from the standpoint of land? On this special edition of Contexto Internacional: journal of global connections we are proposed to dive in those questions. The sea has been relegated to a secondary position in the discipline of International Relations. In this narrative, the sea appears as an interweave, a conductor that allows communication between two or more telluric entities, a space where the production of life, community, and politics does not occur. This special edition proposes re- discussing this logic, restoring the sea to the theoretical debate, thinking of it as a space with its own temporalities and spatialities that also inform the ways of thinking about international politics. We by no means reject the idea that the sea is also shaped by terrestrial space. We invite efforts to theorize a co-constitution between sea and land which contributes to articulating modernity/coloniality in both ontological and epistemological terms.

Existing studies of the sea are restricted to observing it from an “already territorialised” look, which means to say: from the look of a subject shaped by a statist – and static – ontology that takes rigidity and fixation as virtues and goals of the epistemological process. The sovereign gaze favours rest over movement and crystallises the seaman’s fluidity, making it “terrestrial”. In its most traditional perimeter, the discipline did not perceive or did not want to perceive those concepts and categories mobilised from movement, flow, circulation, crossroads and/or encounters are ontologically and epistemologically much more potent than the mere imagination of rigidity of territorialisation.

This special edition aims to remove the sea from the attic of the discipline of international relations to treat it not as the subject of a “terrestrial academic look”, but as an ontological and epistemological possibility to question the borders, lines, and mobilities that support dominant narratives about modernity/coloniality. The sea deserves a prominent place, its own place in academic research.

We are interested in full-length manuscripts which think about the sea theoretically. Possible topics include:

Authors should submit their abstracts (up to 300 words) until July 31st, 2022 to Contexto Internacional online system. The preselected authors will have until October 31st, 2022, to submit the complete paper, which will be then go through CINT’s peer-reviewing process. All articles must follow CINT’s Authors’ Guidelines.

Contexto Internacional is a peer-reviewed journal of International Relations published in English and based at the Institute of International Relations, PUC-Rio, Brazil. Its aim is to offer a forum for conceptually innovative research in International Relations broadly defined. Contexto is particularly keen to promote and encourage the development of International Relations in/of/from the Global South. Submissions that contribute to an understanding of the plurality of perspectives present in the field of IR and that advance a dialogue on the connections between situated knowledge and global affairs are therefore preferred. All articles are subject to a double-blind peer review process. Submissions must be original and must not be under review elsewhere while under consideration by Contexto. Submissions in English, French, Portuguese and Spanish are accepted and will be reviewed in the language of submission. However, if the review process results in a decision to publish, it is the responsibility of the author alone to translate the article into English. For further information about the journal and the online submission process please consult the journal website.